Geroskipou Beach is a famous Cyprus beach situated in the Paphos region. The beach is well-known for its long, sandy stretches and crystal-clear waters in a bay protected by a headland.

Geroskipou Beach is a small beach near the resort village of the same name. It is located on the southwest coast of Cyprus, 15 minutes drive from Paphos’ major resort. The length of the beach is 350 meters. Like many other beaches in Cyprus, Geroskipou has a Blue Flag certificate for the coastline and sea’s cleanliness. Another name for Geroskipou beach is Atlantis, after the beach’s fish restaurant of the same name. You can see the flying planes from the coast – landing and departing from Paphos airport.

Geroskipou Beach is located in a secluded cove – there are no noisy highways or busy residential areas. Picturesque gardens frame the beach with soft lawns, which are pleasant to stroll after a swim. Thanks to the surrounding gardens, Geroskipou got its name. According to an ancient Greek legend, there were sacred gardens in this place, in which the locals in ancient times brought gifts to the goddess Aphrodite. The word “Geroskipu” (Greek version, “Eroskipu”) is translated as “sacred garden.”

There are several restaurants and cafes along the coast. The water is clean and clear, has moderate surf, and is suitable for swimming.  The Geroskipou municipal beach is one of the busiest beaches on the island and is popular with locals and tourists alike. It is a great place to relax and enjoy the Mediterranean sun. There are plenty of sun loungers and parasols for visitors to use, and the beach is also well-equipped with showers, toilets, and a lifeguard station.

Visitors can also participate in activities such as windsurfing, jet skiing, and banana boat rides. There are hiking and cycling trails in the nearby hills for those who want to explore the area.

Geroskipou municipal beach is the perfect place to enjoy a day by the sea. Whether you want to relax on the sand, take a swim in the clear water or try your hand at a range of water sports, this beach has something for everyone. 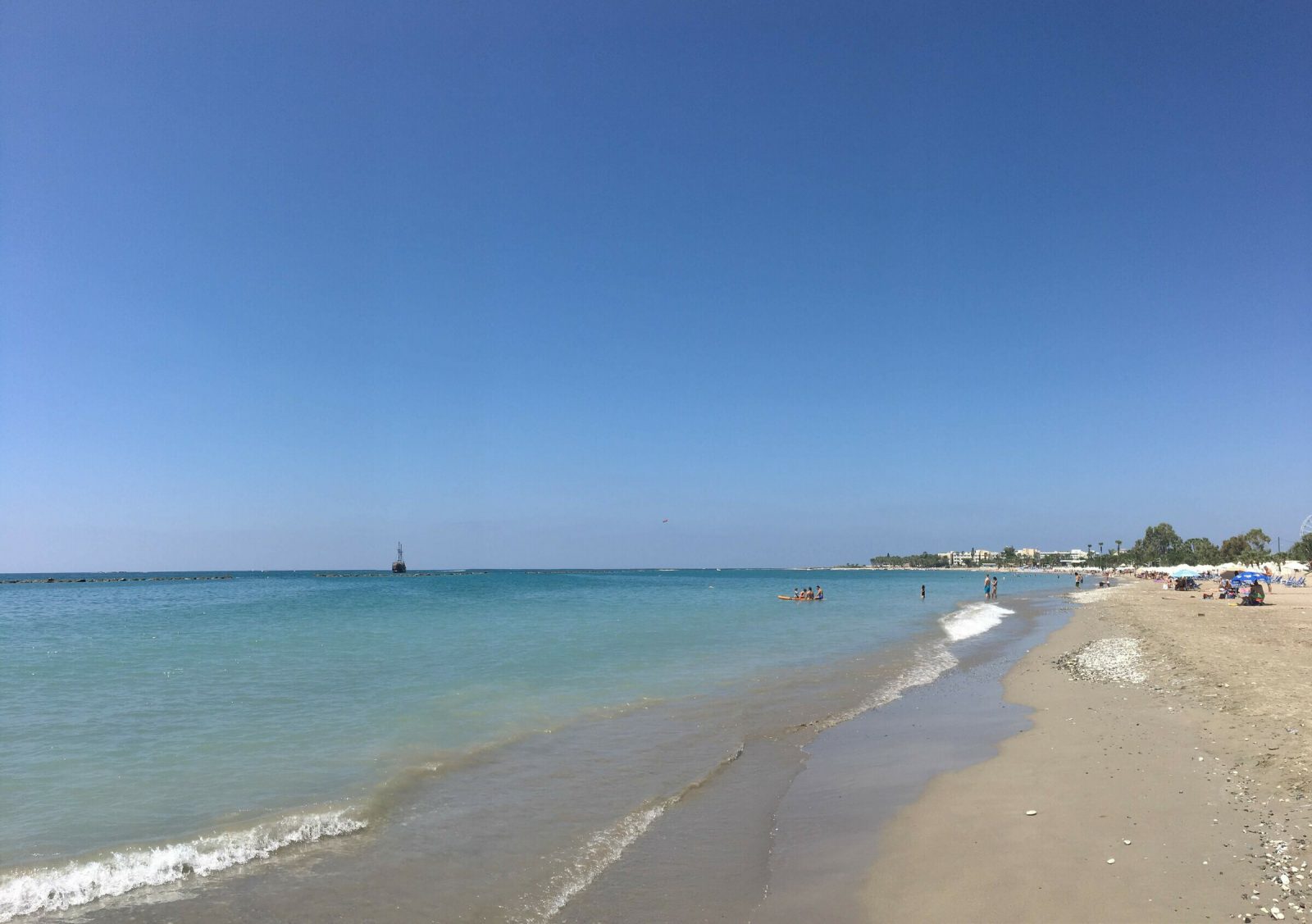 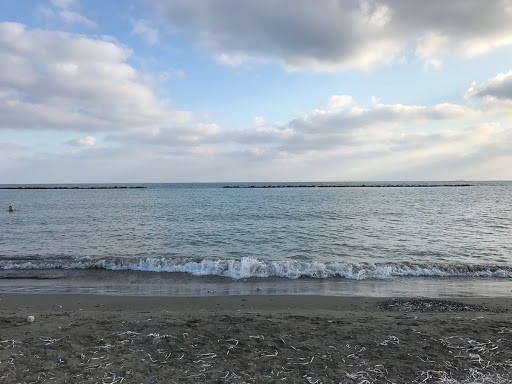 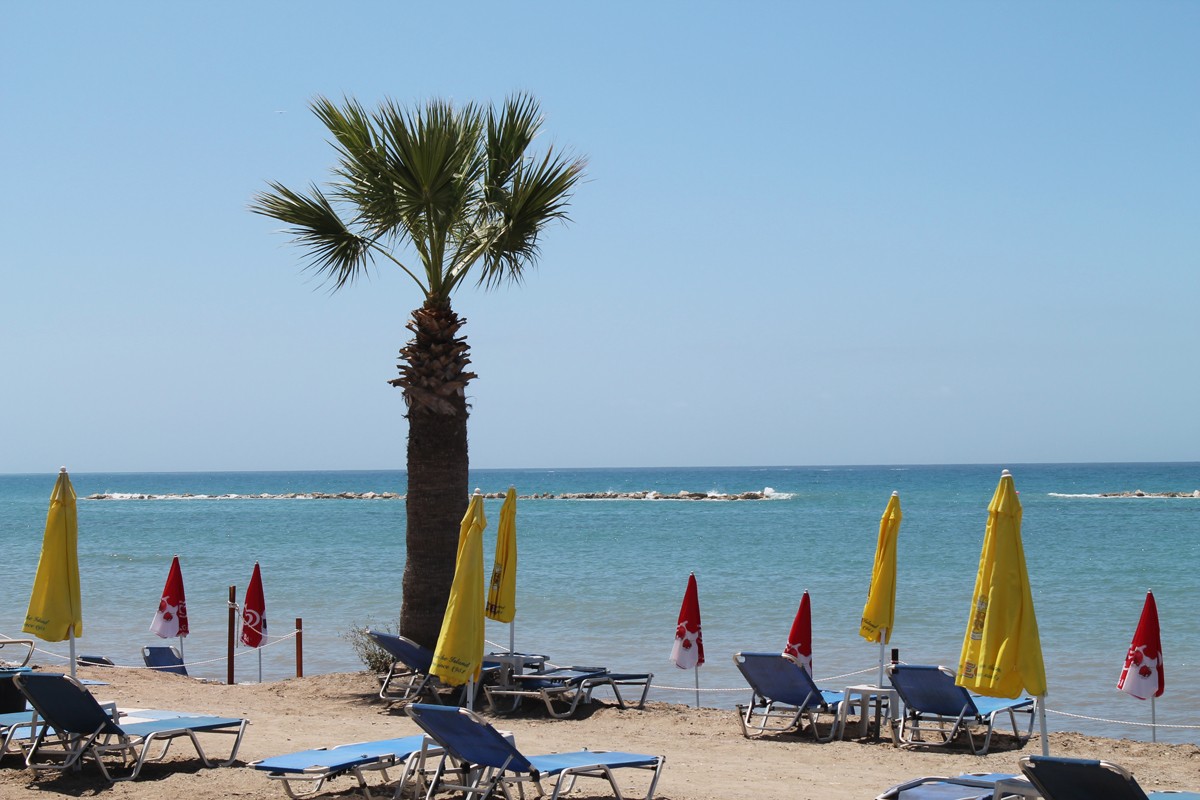 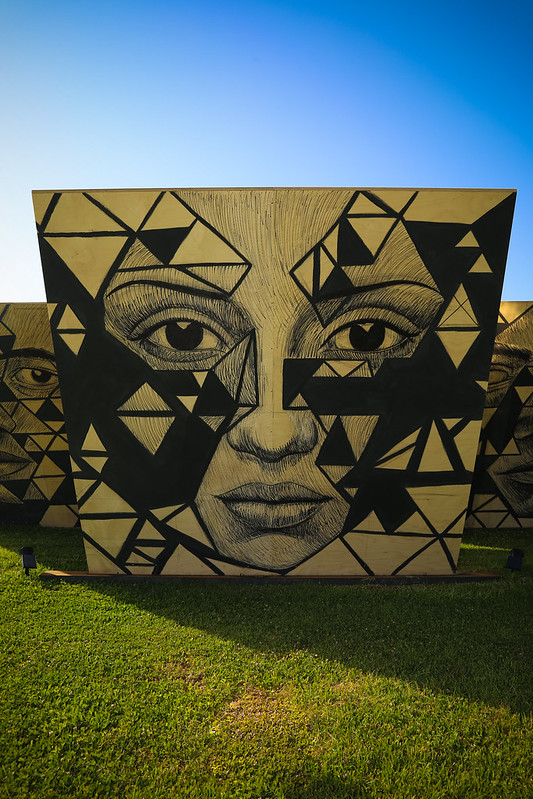 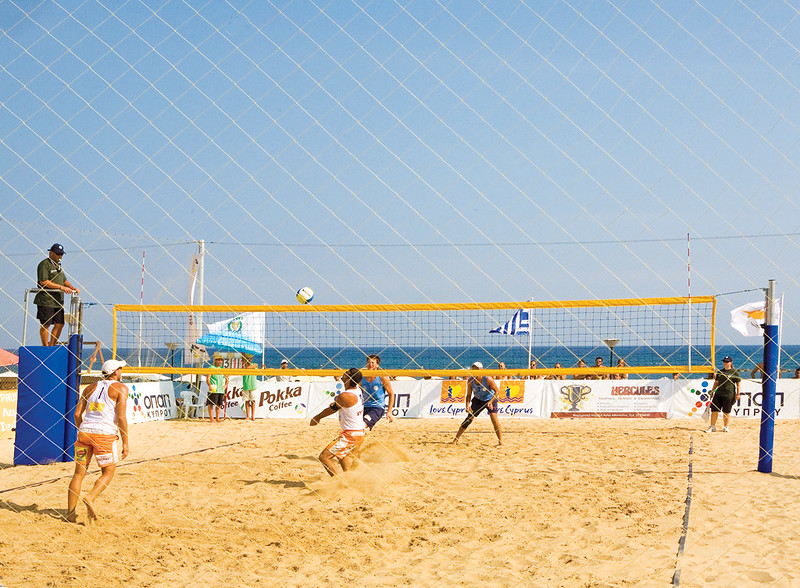 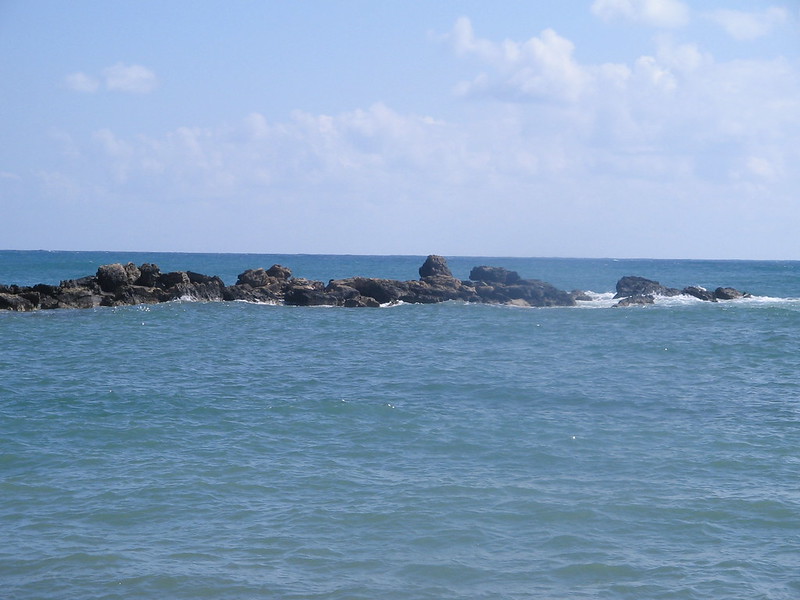 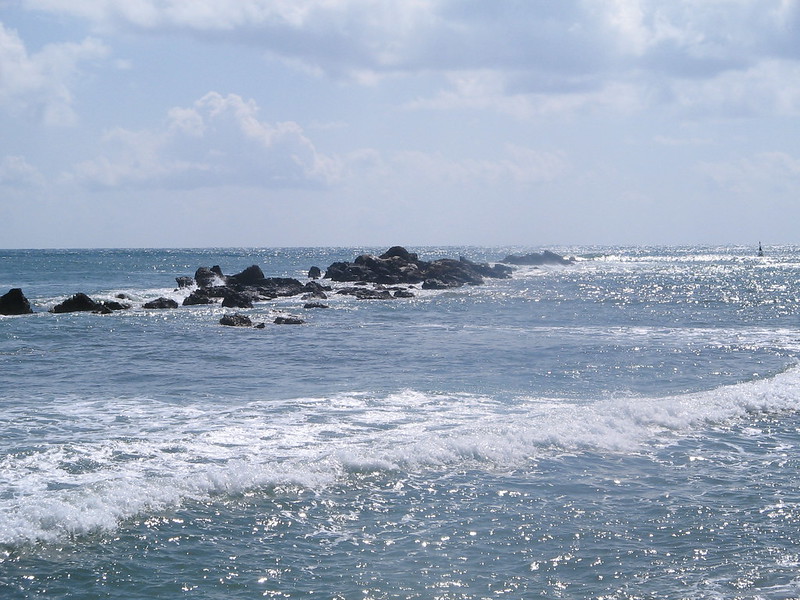 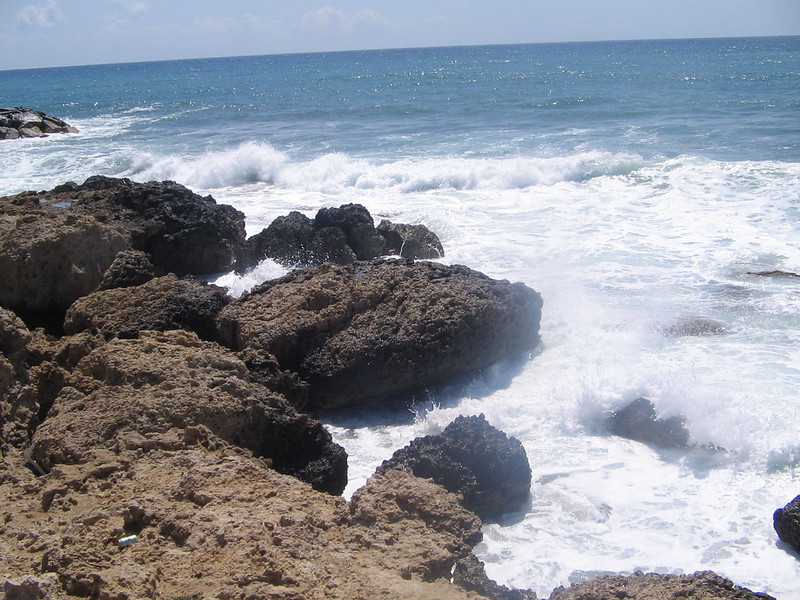 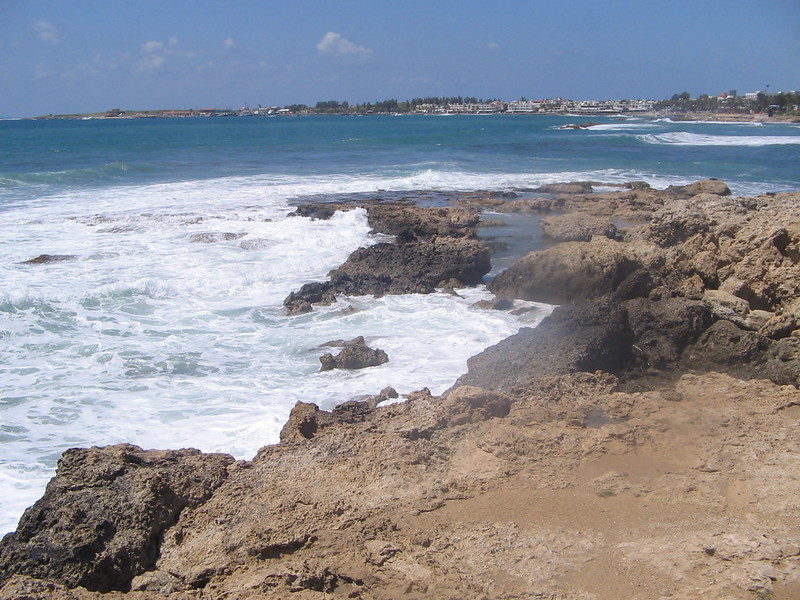 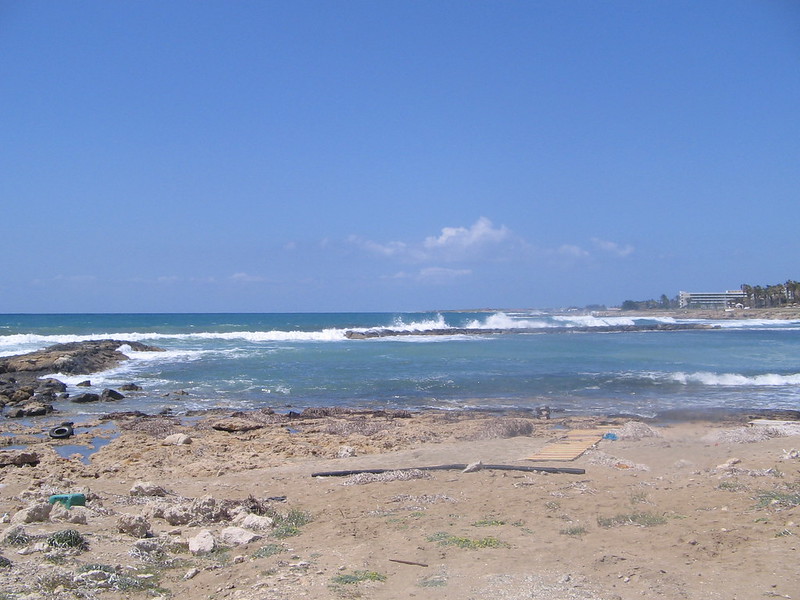 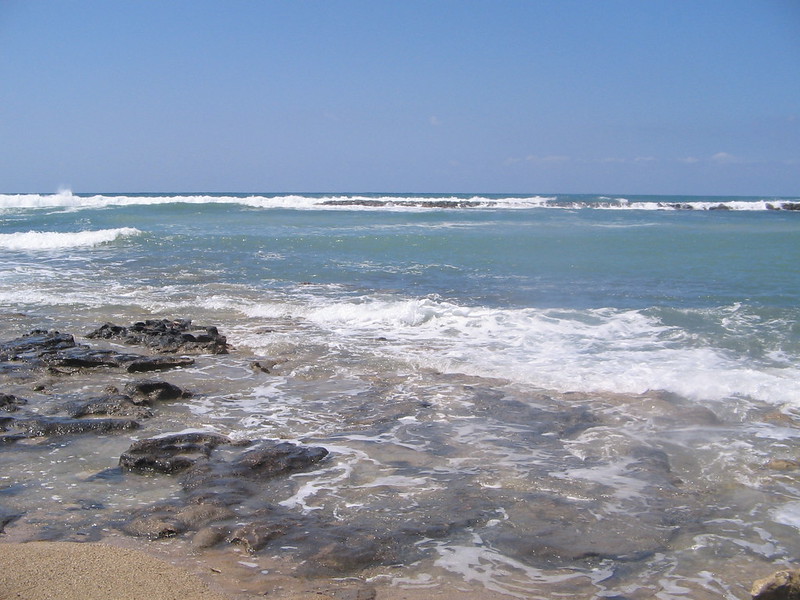 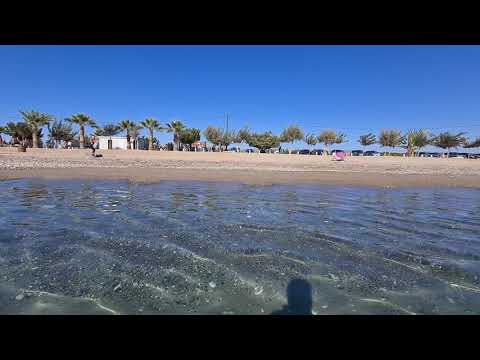 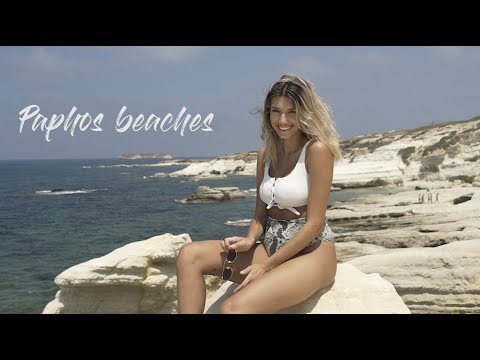 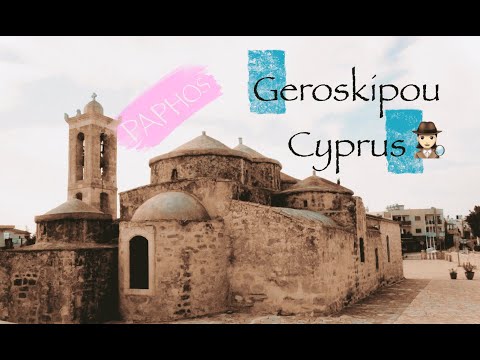 How to get to the Geroskipou Beach

Traveling by car from Paphos will not take long. The distance between Paphos and Geroskipou is 3-5 kilometers. The exact coordinates of Geroskipou Beach: 34.7336, 32.4512. Paid parking is available at the beach. The cost depends on the duration of the parking.

Buses stop near the beach and can be reached from the Kato Paphos (Lower Town) area. The journey does not take much time – you can count on 10-15 minutes. Get off at stop “10-15” near the Louis Phaethon Beach Club. It is worth informing the bus driver about the stop in advance. From the bus stop to the beach – no more than 5 minutes’ walk.

It will take about an hour to walk from Paphos to Geroskipou Beach. The road runs along the sea and wild beaches, where you can also stop and swim. A taxi from the center of Paphos will cost 10-15 euros one way.

There are usually quite a few people on the Geroskipou Beach from December to February.

Cyprus is the sunniest island in the Mediterranean with the warmest seawater. From the subtropical Mediterranean climate, Paphos “inherited” the clarity, serenity, sultry summer months, and the soft charm of the winter season. The average air temperature in Paphos in July-August is + 25-34 ° С, in January-February – + 17-19 ° С. Warmed up by dazzling sunlight to a comfortable + 23–25 ° С, the Mediterranean Sea cools down to + 14–15 ° С by December.

Up to 330 days of sunshine a year, almost zero precipitation from April to October, smooth change of seasons are the main features of the Paphos climate. The warm and dry climate determines the lush diversity of Paphos’ nature.

With the arrival of spring, the resort and the suburbs are covered with luscious green carpets, on which orchids, Cypriot anemones, and poppies bloom in an outlandish pattern, according to legend, “born” from the tears of Aphrodite by her beloved Adonis. The magnificent panorama of Paphos is complemented by blooming almonds against the backdrop of ocher mountains.

Geroskipou Beach rarely experiences rain from May to September. Generally, the weather is good. 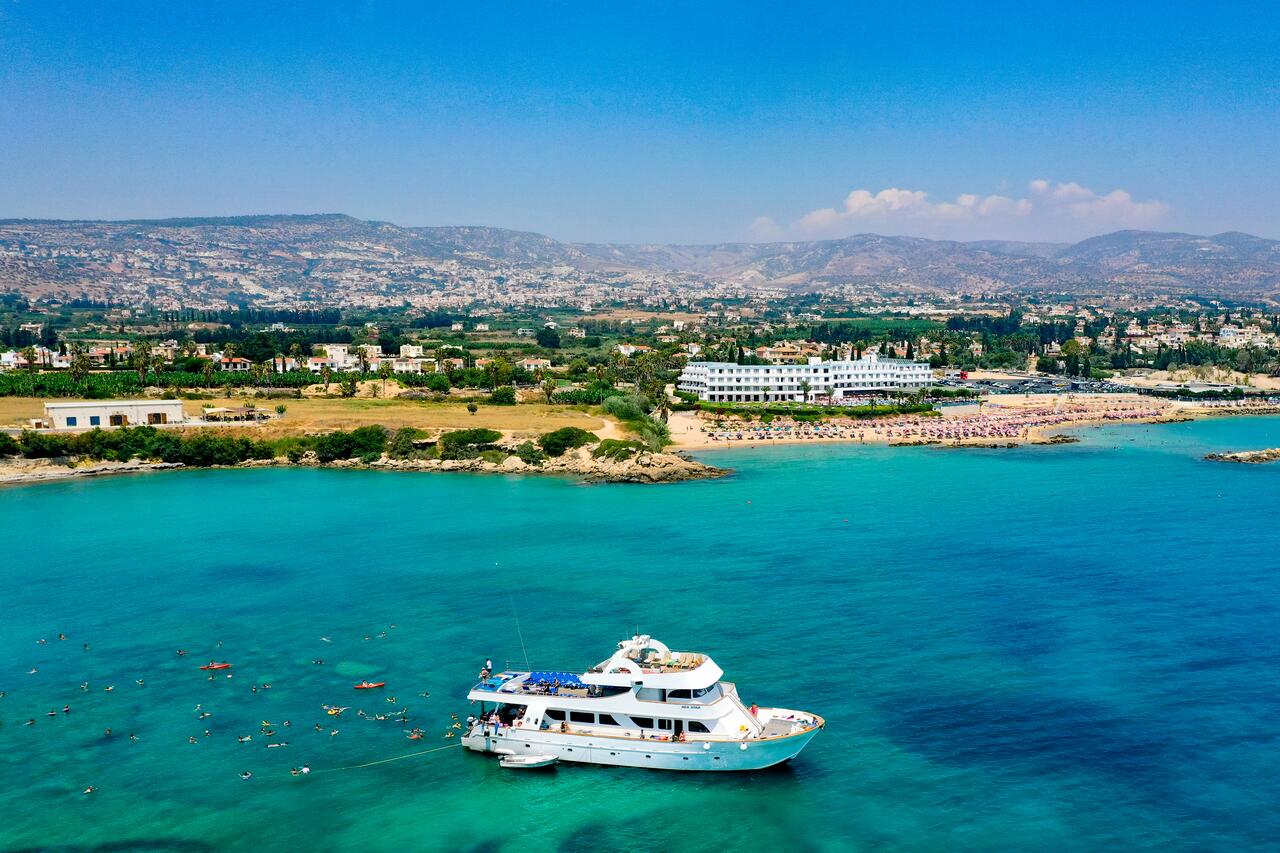